I was planning on taking the Reign out for my first ride back on dirt, the theory being that the softer front end and more forgiving tyres would be easier on my recovering broken thumb, but a day earlier Id decided to dismantle the bike .. IDIOT!

So when the opportunity arose I had no choice but to take the far more twitchy Anthem, complete with low tredded Crossmarks, no dropper post and SPDs.  To put this in perspective this was to be my 3rd ride on SPDs, talk about upping the anxiety levels.

I neednt have worried.  A couple of runs from the trail head down to the big open sandy section had me feeling pretty good.  Virtually no pain in the hand, I could change up the front gear with a little pain, but other than that there was basically no issue riding.

I had to drop #1Daughter in Parramatta so it seemed like a good opportunity to ride the Wylde MTB Trails for the first time.  Id been reliably informed by Cycology and @dipposki that it was a great place to start my off-road rehab and they were spot on.

Despite the 33ºC+ temperature I had a great time riding the full 12km loop.  Ill freely admit I was very very nervous being clipped in on dry dusty trails, I crawled over every rock garden with the apprehension of a newbie and was pretty conservative on the dirt berms but as the lap wore on my confidence on the flowy sections increased

The ride ended with a chat with Lawrence from Narrabeen (ha .. I live in an area surrounded by MTB trails but on this day I drove for an hour and met a guy who lives about 10 mins from me) and his mate Tony from Coogee.

Sunday, return to the Wylde West.

I had been planning to ride Ourimbah but Id enjoyed Wylde and it was precisely what I needed this close to my trip.  I was concerned that some of the steps and ruts at Ourimbah might be too much for my hand and I was keen to push myself a little more around the Wylde berms and take on the rock gardens with a bit more aggression.

And thats precisely what I did.

But lets not beat around the bush, a lot of what got me moving more freely today was the mounting of my new dropper seat post on the Anthem, something I swore I would never do while riding in Australia.  That theory is now out the window because the dropper gave me more opportunity to move around on the bike and that was my ticket to a whole new level of confidence.  I found myself far more committed in the corners and I was tearing through the flowy sections like I was back on the Reign riding Stromlos Skyline.

I took a short break at the end of Lap 1 to recharge and by chance ended up chatting to a couple of guys, one of whom turned out to be @dipposki .  Ha .. talk about co-incidence.

If you ever see a fat 40 year old wearing glasses, riding a Giant, with a GoPro theres a good chance its me .. say hi! 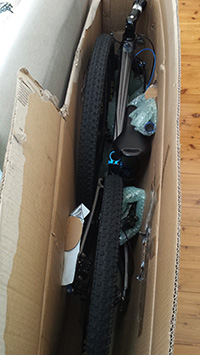 Getting out on Lap 2 was awesome.  I did my best to go brake free through all the rock gardens.  They really arent that technical, but it was a case of testing out the strength in my hand and the ability to push through any shots of pain.  I was REALLY surprised to have got through all clear.

I was also focusing on railing the corners and riding efficiently (Lap 1 I pushed hard to keep momentum  stood up the whole way on Col de Cecil and couldn't do that on Lap 2), but probably most important was retraining my brain to ride when fatigued and that was a challenge!  At times I felt far too casual, I will need to retrain myself to switch on if Im to ride Rotorua safely.

Chances of riding are looking very bloody good, so much so that I spent the afternoon cleaning and packing the Anthem!  (BTW both bikes are coming with me)