I had one of the best weekends riding .. but it almost didn't turn out that way.

I'd spent many hours monitoring my phone's weather app in order to find the best weekend for the 3 hour drive down to Canberra's Stromlo Forest Park. The weather report had forecast sunshine for more than a week but of course the day after I booked my accommodation it changed from sunny to pouring rain - all weekend. So I headed off expecting to spend the weekend in the War Memorial, driving around to bike shops and looking for a restaurant with a decent béarnaise sauce.

It pissed down until well beyond the Southern Highlands but as I approached Majura State Forest - may it rest in peace - patches of sun started to appear so I dumped my bags at the hotel, geared up and rushed across the city toward Mt Stromlo. And I'm glad I did!

Despite rain earlier in the day the trails were in remarkably good condition and in the most part dry .. or maybe damp. There was only the odd puddle and virtually no mud to speak of.

I was totally stoked with my first run (Loop 2). I climbed well and to my recollection the only feet-down occurred in the section from the Observatory to Echidna Gap - Rockys. Descending I felt really comfortable. I flew down Western Wedgetail and carried that enthusiasm through Skyline with great conviction. In fact I was really blown away with how well I went on Skyline. Confidence is an amazing thing.

Luge was going to be the real yardstick but as I dropped in from the (Buchar) bridge at pace and hit the first set of berms I knew I was up for it.  I was dropping the inside arm with far greater confidence than when I rode the Thredbo Flow Trail at Easter.  While I still need to work on my technique and commitment I was really happy with my improvement in the berms (there are no banked corners on my local trails - I rarely get a chance to practice them).

Totally stoked with my ride I popped a few jumps on the way out in celebration before almost rear ending a guy who simply didn't get the idea of pulling off the track when stopping.

I considered climbing up for a second run, but the hard going on a damp hill and my plans to do at least 3 descents the next day kept me on the lower slopes. Or more precisely in "the Playground". I learnt a valuable lesson that day .. Leave the children's playground for the children. OTB on the seesaw (teeter totter for the Americans) and a fairly serious knock and slash to the ankle that had me hitting up the bar staff for a bag of ice .. "and a glass of Shiraz thanks".
(See the video above for the #Fail footage.) 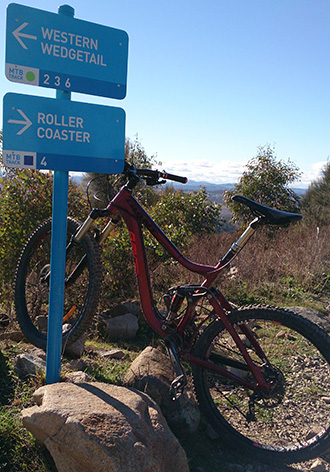 Sun .. glorious sun. I made my way to the top of the mountain, set my brain to "fun" and took off down Wedgetail, Skyline and Luge knocking tonnes of time off my previous day's run and feeling far more empowered along the whole descent.

I took a short break at the bridge to watch a group of 4 guys flying down the Downhill on Enduro Bikes, which totally inspired me to keep working on my technical descent skills. My goal over the next 12 months is to build up my skill set and confidence so I can ride gnarly long descents such as Megavalanche (prolly just ride - not race).

With that goal now firmly imprinted in my brain I started to ask questions of the locals and they all spoke of Pork Barrel and Double Dissolution as being the next step up.

And they weren't wrong.

Pork Barrel forks off Western Wedgetail just before Skyline and the trail fairies haven't mucked around. A solid 2ft drop immediately after the fork was a fair indicator of what was to come.

It was SUPERB .. rocks, more rocks, rock drops, rock slabs, loose rocks, in-trail rocks, big rocks, little rocks .. lots and lots of rocks. After only one run it became my new favourite trail, in fact about halfway along the trail I can be heard on the video saying "Oh Yeah! This is exactly what we want".

Pork Barrel ends at a crossroads and straight over the way is Double Dissolution. While Pork Barrel was all about rocks and drops Double Dissolution is all about jumps. Lots of jumps up to around 2ft high, some singles, some doubles and some tabletops. Its major challenge comes in the number of jumps, how quickly you come across them and their sometimes precarious positioning (just before, during or after turns). It was a great place to practice my "scrub or jump" reflexes and as the afternoon shadows reduced trail visibility this became all the more important.

The trail itself was far smoother than Pork Barrel, even smoother than Skyline, in fact its pretty nicely groomed the whole way. It's fast and flowy, you can pump off the jumps and bumps and really hold momentum through banked corners.  Really fun stuff!

It was a kick arse ride from Echidna Gap through Western Wedgetail, Pork Barrel and Double Dissolution to the Western Gate, so good that I walked back up the near vertical fire trail to do it again.

In my opinion the only downside of this descent is the undulating winding XC track back to the base, NOTHING like the descent thus far. It's the MTB equivalent of traversing via snowboard from Mt Perisher to the Valley Terminal. That being said I'm sure there are plenty of MTBers that love those flowy XC trails.

After climbing around 1000m of vert and descending it all with a big arse smile on my face my weekend of MTB came to an end.

A top weekend which cemented Stromlo Forest Park as my new favourite place to ride, relegating Nerang State Forest to 2nd and Thredbo to 3rd.