A collection of random thoughts and mountain bike related bits and pieces.

A little about me ..

I first got on a MTB in the summer of 2008 / 2009 as part of my weight loss program, prior to that I hadnt ridden a bike for over 20 years and Id never even owned a bike with gears. My bike experience was limited to modding my Malvern Star (chopper seat and sissy bar) with a normal saddle and new paint job when the BMX fad hit in the late 70s. I built jumps on the road out of wood and bricks and dreamed of owning a Redline with tuffs. 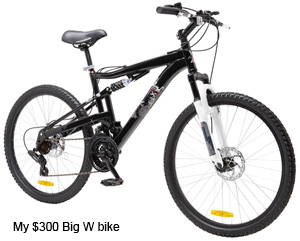 Fast forward to 2008.  A mate of mine was a keen MTBer and had been riding a Mongoose hardtail for some time .. back when the XC track at Oxford Falls wasnt illegal.  I rode with him a few times in the summer of 08/09 on my K-Mart hardtail but he went to the US in early 2009 so my motivation dropped.

I picked it up again in 2010 and after having my push bike totaled when a car rear ended my bike rack I upgraded to a $300 Diamondback Dual Suspension bike from Big W.  I like to point out to all the gear types that I successfully rode a 1 suspension bike that was worth less than their brakeset around Red Hill, Manly Dam, Jindabyne and Nerang  until

One day riding home from work a cyclist pulled up beside me and told me something was really wrong with my bike. On closer inspection I noticed cracks in the frame and the suspension pivots had a lot of movement.  Even putting my foot on the pedal at the lights was enough to bend the frame.  It was at that point I decided to invest in a serious mountain bike.

I certainly dont claim to be a MTB expert but I hope that through this blog I can pass on some of the things I have learnt in conjunction with the trail info Im collecting.

See you on the trails.