27/1/2013
< Previous   Next >
Its fair to say I was beyond nervous as I got on the Kosciuszko Express Chairlift at Thredbo. Id never ridden a downhill bike, hell Id never even sat on one until minutes before. It was case of just diving straight in and going for it.

I hate to think how many times Ive tried to navigate my snowboard along the flat and icy cat track under the chairlift however during summer its a whole different proposition. For a start its steep! Steep and loose! Something that usually doesnt freak me out but this, the opening and easy section of the descent, made me super scared.

By the time we hit the Kosciuszko Flow Trail I was feeling out of my depth but as luck would have it the opening section of single trail suited my experience.  All the riding Id done at Manly Dam and Red Hill had groomed me for a trail like this, rocks, big rocks, plenty of rocks plus the extra 2 of travel and the slack head angle of the Giant Glory 2 was helping to make very easy work of it.  I was in the zone, until the first switchback - that put me back in my place.

Even though we stopped 6 times on the first run I was shattered by the end. A long break before a second run, then another long break before my third and I really should have called it a day right there, but Chocolate and Redbull had me believing I could do one more.

As I mounted the chairlift for the final time that day I started to entertain the idea of riding the Thredbo Downhill trail.

I know its the last run of the day and I shouldnt be pushing myself or doing something new, but I hired the Glory to do the downhill and Ill be really disappointed if I ride away without doing it,  I thought to myself. 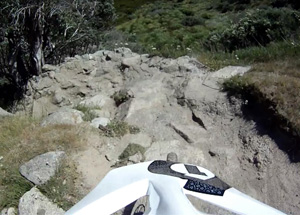 I suck at corners, Ive wasted so much energy trying to push this beast of a bike around tight corners when what I should have done was the downhill it would eat up the technical trail. Hell Im better suited to the technical trail too!  I love rocks!

I have studied this run for hours on YouTube. I should be able to do it on my Reign. If Im ever going to do it I need to do it now, on the Glory.

I can always walk *that* section'

Some of that I said out loud.

Motivated by positive reinforcement messages stuck on my hands with elastoplast I launched myself down the Thredbo Downhill. 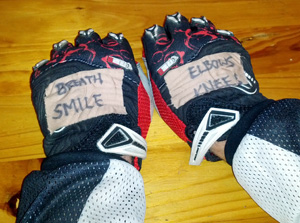 The opening section is fairly flat so I went hard, while the video may appear to show otherwise, I was pushing myself.  Considering it was the last run of the day and my first time down the trail .. not to mention my first day on a downhill bike I was pretty happy with myself so far.

I needed a 5 minute break at Kareela Hutte because my rear breaking finger was cramping. Once decramped and adequately stretched-out I hit the most difficult section of the trail that descends down the black switchbacks into the valley towards the old Ramshead Chair.

I rode most of it, albeit quite slowly.  I came unstuck a couple of times and walked two sections I didnt have the balls ride. My plan to stick to the basics, get my arse back and let the bike do the work had been a success, I only went OTB once and that was only due to a lack of concentration as the trail eased at the end of a long technical section.

I was tested again as the trail entered the bush adjacent to the Racecourse Ski Run. I just didnt have the skills to hold the momentum needed on one rocky turn so I took the wise option of walking it, but that was the final time the course defeated me. From there it was a flowy run to the finish.

WOW what a buzz. I was physically smashed, I was mentally shattered. I did half a dozen laps of the lift queue area trying to come down from where I had pushed myself. Sure it wasn't Rampage but I had conquered the Thredbo Downhill.